If you have two functioning legs and a reliable nervous system, walking and running are generally thoughtless tasks. But if you’re a soldier hauling massive amounts of gear on your back for an extended period of time, putting one foot in front of the other can get exhausting.

That’s where the idea for a soft, futuristic “exosuit” came about in 2011 – when DARPA funded a project, called Warrior Web. The U.S. Army partnered with researchers from Harvard’s Wyss Institute to create a wearable device to help military personnel with heavy lifting and improve physical performance overall. By 2017, the army had a solid exosuit prototype that they had tested alongside researchers for three years. But one major problem remained – the exosuit let soldiers walk quickly, but they couldn’t run without the device tripping them up.

So, researchers at the Wyss Institute built on the former prototype to make an exosuit that helped users whether they’re walking or running. It also does so in a deceptively easy manner. The latest iteration features a soft pair of snug shorts with cables wrapped around the thighs and waist, designed to pull the legs in a certain fashion depending on the user’s gait.

Research on the exosuit, published Thursday in the journal Science, lays out the groundwork for this new tech. It also explains how the motions of walking and running can be determined through the use of an embedded computer.

DARPA stopped funding the project a few years ago. And the exosuit’s applications could go far beyond the military – possibly to hospitals or workplaces, as well.

Imagine a city street flooded with people rushing to work in the morning. If someone breaks out into a sprint to catch the bus, jogs across the street to beat a red light or even walks up an incline – their gait will be completely different in each scenario. We barely notice the change in motion, but training a machine to know when a person is walking, running or going uphill is a bigger challenge than it may seem.

As the exosuit’s cables pull on a wearer’s legs, the computer tells them exactly which directions they should be pulling in, and with how much force. Otherwise, says technical lead David Perry, the suit can hinder motion, rather than help it.

“There is no one way to pull on the leg that is helpful for both walking and running,” Perry says. “If you miss a single step, that’s really going to mess up how someone is moving.”

And the researchers spent plenty of time wearing the shorts themselves: before doing their final demonstration, a trial where six soldiers had to wear the exosuits during training exercises, Perry says he and his colleagues suited up and ran around the research buildings.

It was hard to tell exactly what the shorts were doing, he says. But with them on, the high-tech exosuits gave them the boost to decrease their metabolic rates by about 9.3 percent when walking and 4 percent when running.

“Once you shut it off, though, your legs suddenly feel heavy and it’s clear how much work the robot was doing for you,” Perry says. “It’s like stepping off the end of a moving sidewalk at the airport.” 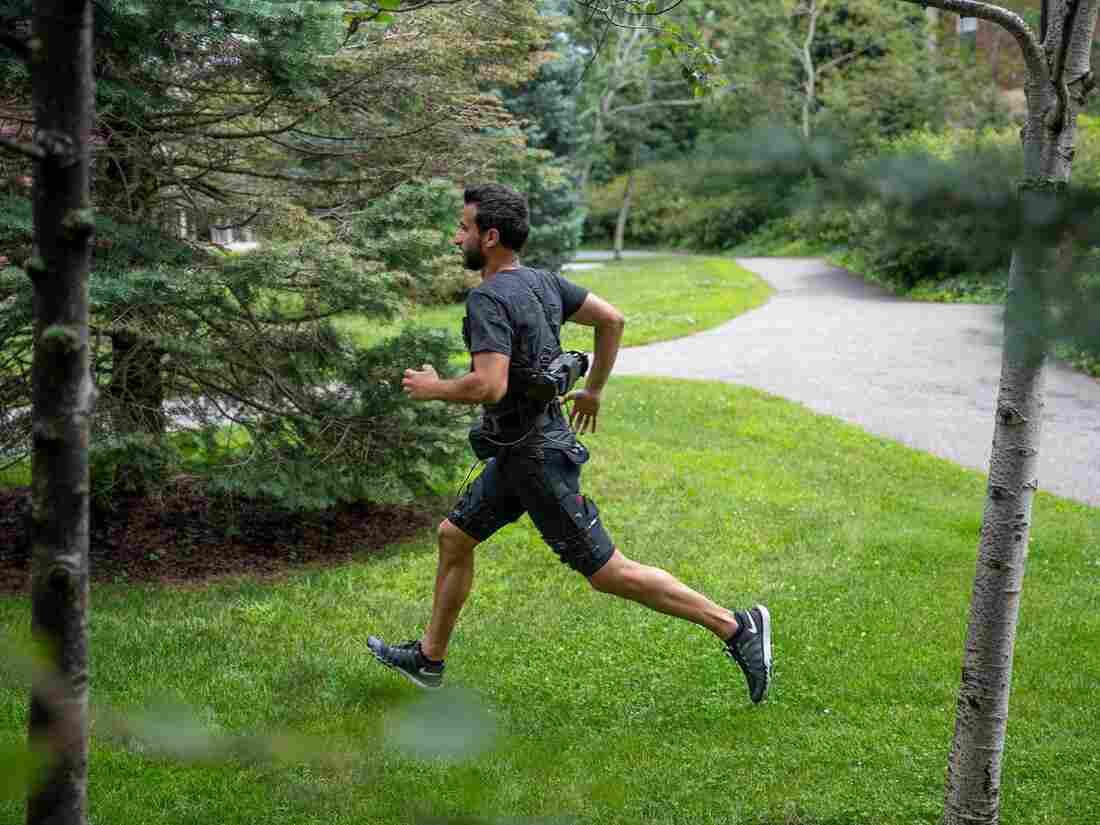 Using the tech in military settings isn’t totally off the table, but without DARPA funding, Perry says the Wyss Institute is also looking for new ways to bring the shorts to a variety of markets.

Currently, they have a partnership with ReWalk Robotics to use the tech in hospitals and physical therapy, helping stroke and multiple sclerosis patients regain their strength in recovery.

And Perry says these robo shorts could also be used to thwart back injuries in industries where workers carry heavy loads. The Wyss Institute hires professionals from different industries to commercialize tech like the exosuit, and the team even has clothing design experts to find ways to fit them to a wider range of body types.

So who knows – maybe one day you’ll be able to buy a pair of futuristic shorts for yourself.